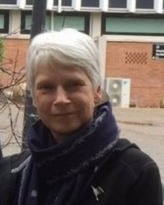 'Searching for Australian Words' in The National Library Magazine, (June 2013).

Voices of Queensland: Words from the Sunshine State, (Melbourne, OUP, 2001).