» CALC » Natural Rights and the Rise of National Citizenship: some reflections on the Australian experience in literature from 1788 onwards

Natural Rights and the Rise of National Citizenship: some reflections on the Australian experience in literature from 1788 onwards 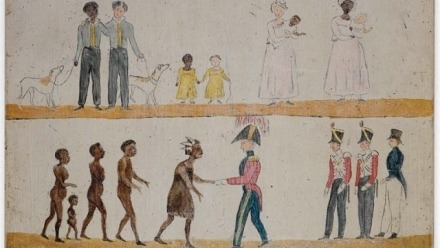 For access to the Zoom ID and Password for this seminar, please send an email enquiry to : monique.rooney@anu.edu.au

European colonisers arrived in Australia at precisely the point in time when modern ideas of citizenship were beginning to emerge from Enlightenment debates about what it meant to owe allegiance to a particular sovereign or a certain territory.  In the 1780s and the run-up to the French Revolution, new understandings of citizenship grew out of democratic commitments to the equality of all before the law – and radical theorists in France and in England experimented with the concept of a universal citizenship of humanity before finally choosing to strengthen the community of the nation instead.  In this paper, I want to think about the sorts of citizenship beyond borders that underpinned settler colonialism and the appropriation of Aboriginal land, as well as Aboriginal people’s resistance to the imposition of that regime.  Where did rights come from: who created them, and on whom were they bestowed?  In the British House of Commons in the 1830s, arguments in favour of the abolition of slavery were delivered alongside defences of the invasion of Aboriginal lands, a terrible coincidence which reveals the philosophical and rhetorical incoherence of colonial governance.  In exploring these questions, I will consider a number of nineteenth-century texts as well as some contemporary Australian novels which seek to expose and redress the inequalities of the past.

Jan-Melissa Schramm is Professor of Literature and Law in the Faculty of English at the University of Cambridge.  Originally from Tasmania, she came to the ANU on a National Undergraduate Scholarship to study Arts/ Law and was awarded the University Medal in English.  After a brief period in private practice back in Tasmania, Jan was awarded a scholarship to Cambridge to write her PhD on literature and the history of the rules of evidence in law, and she has taught in Cambridge ever since.  Jan is the author of three monographs, Testimony and Advocacy in Victorian Law, Literature, and Theology (2000), Atonement and Self-Sacrifice in Nineteenth-Century Narrative (2012) and Censorship and the Representation of the Sacred in Nineteenth-Century England (2019), and she has also co-edited two volumes of essays, Fictions of Knowledge: Fact, Evidence, Doubt (2011) and Sacrifice and the Modern Literature of War (2018).  Jan has recently finished a three-year stint as Deputy Director of Cambridge’s interdisciplinary research institute, CRASSH, and she is currently writing a book on the rhetoric of human rights in England after the French Revolution.