» Centre for Classical Studies » Journey to the heartland: ANU Ancient History students in the Mediterranean » Lakonia 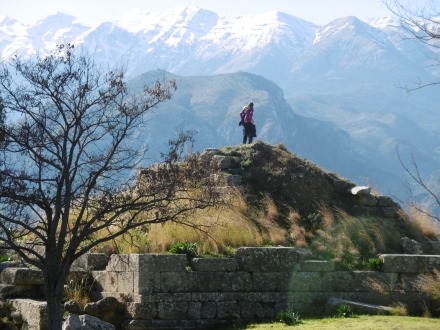 Our first stop during our day in Lakonia was the Archaeological Museum of Sparta. While the collection was small, it had a distinctiveness, namely many motifs of the Dioskouroi, snakes, and perhaps some Syrian stylistic influences, that left us wanting to find out more about this culture of which we know so little.

On our way to the site of the ancient Akropolis, we ran into a Greek archaeological team working on the walls of the city and this was a special experience because we got to encounter the process of reconstruction/restoration with which we're always grappling. Inspired by Terry's passion for the Spartans, and thanks to Thucydides' famous insight about superficiality noone could be disappointed at the site of Sparta. As I stood contemplating the lack of monuments and city walls, the vast plain of olive trees, and the imposing mountains which separated the Spartans from the Messenians, it was apparent to me how important an understanding of the landscape is for understanding the mindset of these mysterious people.

Stopping by the Temple of Artemis Orthia as we left the city, we learned that cheese was such an important source of protein that it was a prize for athletic excellence. I heartily approved, as the large quantity of Greek yoghurt that I had been eating on this trip fueled me on the hike to our final site, the Menelaion. Weknow little of the history of the shrine to Menelaus and Helen, and eve. less about the adjacent Mykenaian mansions that are perhaps precursors to the palaces at Mykenai and Tiryns and Pylos, but in conjunction with the aesthetic unpretentiousness and beautiful architecture of the monument, the site showed that really the Spartans championed the principal of "less is more". Looking across the once roaring, now trickling, Eurotas out towards the frightening mountains, I had never felt closer to ancient Greek religion.